Shoe Shops aren’t the only retailers who’ve noticed a difference. When challenging a Councillor (who shall remain nameless) about improving the availability of parking, reducing business rates and making the Inverness City Centre a more attractive place to shop he suggested we “get a website” as a means of fixing our problem of falling footfall.  Since then we’ve done exactly that and have largely given up hope of changing the mindset of Local Councils, Planning Officials, Politicians & Councillors in the towns and cities in which we trade.  It is a sad state of affairs. 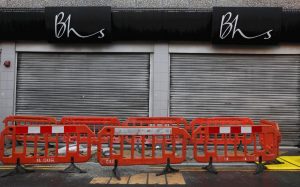 The recent news of BHS, Brantano & Austin Reed entering administration in 2016 will come as no surprise to fellow retailers who have suffered falling footfall for several years in combination with rising costs.  Some cost increases are part and parcel of being in business.  However, in the case of business rates payable by retailers, they appear to have become the Scottish Government’s tool for increasing tax revenues without any detriment to the number of votes they will receive in their ballot box.  An easy target.  As with the oil industry, our “visionary” politicians have not looked at the long term picture and what is around the next corner.  In the case of retailers, they cannot sustain drastic falls in footfall in combination with a rising business rates costs.
What are “business rates”?
Business rates are a payment businesses are required make to Local Council’s for “services provided”, eg. Maintenance of the streets, lighting etc.  They should not be confused with the a business pays (or not in the case of Google, Amazon, Facebook etc!) to HMRC such as VAT, PAYE, Employer’s NIC and Corporation Tax.  Our business rates as a percentage of sales have risen from 3% in 2008 to 5.9% in 2015 – a staggering increase of 97%.
Why have retail business rates payable increased exponentially in recent years?
The fundamental issue is that there has been a drastic decrease in footfall. Town / city centre footfall decreases have been caused by:
1. Out of town retail developments – free and convenient parking at out of town retail parks has removed many shoppers from High Streets across Scotland.
2. Online Shopping – the internet has and continues to replace bricks and mortar retail with e-commerce.
3. Lack of availability of Town/City Centre parking – Most planners believe cars should be excluded from Town and City Centres.  As a result, streets are pedestrianised, parking developers (such as NCP) seeking to invest in new parking facilities are discouraged / prevented from investing, customers are given drastic warnings for breaches of stringent parking regulations.  The result is that a vast percentage of the shopping populous use their car to drive to somewhere convenient to shop.  Not everyone is going to use a bus or train to go shopping – it is naïve and idealistic to think otherwise.
4. Delayed Business Rates Review – The 5 yearly business rates review (where a property’s rent is compared to its rateable value at a specific point in time and reduced or increased accordingly) was postponed by SNP for 3 years in the lead up to the referendum “to give business more certainty”.  This means retailers are still paying business rates based on how retail was in 2007 – radically different to what it is now.  Like the Oil Industry crash, the rapidly changing retail environment is something the Scottish Government would prefer to turn a blind eye to rather than admit they made a mistake and correcting it.
5. The Vicious “Closed” Circle – shops closing and lying empty create a negative shopping environment for those that are still open.  At current business rate levels, most entrepreneurs would not take the risk of opening a new shop.  The result is units lie empty for years and the streets become undesirable for shoppers.  Empty shops lead to more empty shops unless action is taken.  It is a vicious circle.
How have retailers managed this to date? 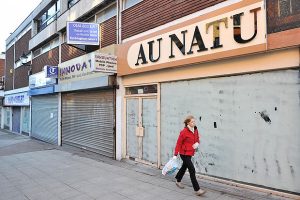 The reality of many small businesses is that many owners are not earning the Living Wage and are struggling to survive.  Even a minor deterioration in cashflow could be enough for them to go bust.  Larger businesses are increasing the prices to compensate for level of business rates whilst building their online business to compensate for falling sales in-store.  In time, bricks & mortar stores will continue to close as it is far more cost effective not to have a shop and to just have a warehouse.  This will of course lead to further job losses and the destruction of the town/city centre shopping experience that many people enjoy so much.  The internet cannot replicate the touch & feel of products.
We have been looking at expanding our own business and have found business rates to be the major reason why we cannot open a new store.  In one case we found business rates payable would equate to 21% of our estimated sales.  The rental value of this property is currently £30,000/annum and the rateable value is £120,000.  In this example, business rates will need to be reduced by 75% before this property would become viable again.  The scale of reductions required is vast.
If the Government & Local Councils would simply admit there is a massive problem and address it, they would find these empty units are filled by all types of business and customers would wish to come back and shop in bricks & mortar.  Vacant shops, charity shops and pawn brokers inevitably are not alluring to the vast majority of customers.  In many instances, overall revenue taken in by reducing business rates may actually increase if rateable values were drastically reduced as vacant properties and charity shops are not contributing as much as a long standing successful business would.  Added to this, a vibrant town centre will increase demand for property which in turn would increase business rates over the long term.
Why is this issue a problem for the whole of Scotland?
1. On the current path we are on, town centre retail as we know it will continue to be decimated and many more jobs will be lost.  Economically we are shooting ourselves in the foot!  The Government will stimulate much needed economic growth simply by reducing retail business rates to levels that are fair & reasonable.  We believe there will always be a vast amount of customers that want to touch, feel and see the products they are buying.
2. Pension funds have a great financial interest in Commerical Retail Property.  Vacant Retail Shops will mean drastic reductions in the value of our pensions.  In many instances we have seen Retail Commercial Property values falling by as much as 50% in the past 5 years.  This problem is chronic and extremely costly to many of us, even if we do not know it yet.
3. As all online retailers will concede, it is a highly competitive environment where very few are profitable.  This is good for customers in the short run but the private sector always demands survival of the fittest.  As such many online retailers will (or indeed have) gone out of business or must make profit in the long run.  Making profit means either price increases or the introduction of additional charges for customers.  In August 2015 John Lewis introduced a Click and Collect charge to compensate for the costs of their online operation, saying the cost base is “unsustainable”.  Many are now offering “free exchanges” as opposed to “free returns” – this of course is a clever means of avoiding the cost and hassle of providing free returns.  Next do not publish any profitability information regarding their online Directory business, much to the annoyance of financiers in the City.  ASOS, Ocado & Amazon all have profit margins varying between 1-2%, again financiers in the City are desperately pressuring these companies to become much more profitable.  Long term, we believe the bricks and mortar and online will have to fully align themselves with each other.  Amazon have already opened their first shop.  Shops will be needed as they are an economic and social requirement alongside the internet.  The big issue is that if shops are decimated by backward thinking planners and excessive business rates then we may not have any shops left. 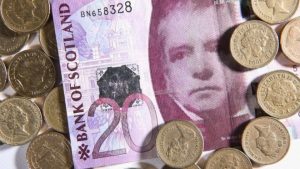 In spite of the points above, The Scottish Government’s Draft Budget for 2016-17 plans to raise an additional £130 million in Business Rates this coming year.  Taken together with a further drastic reduction in the reliefs available to the owners of empty business properties, the delay of the regular rates revaluation to 2017, and court rulings which have restricted the capacity of businesses to appeal their rates bills on the basis of a material change in circumstances the outlook remains bleak.  The commitment from the Deputy First Minister to review of the business rates system in Scotland should be taken with a pinch of salt.  The Scottish Government has a chequered history in this regard. November 2012 was the last time the Government promised “a comprehensive and fundamental review of the rating system” but the resulting consultation has produced no meaningful changes to the existing tax. Indeed Scottish businesses are still awaiting the Scottish Government’s response to a further consultation on the rating appeals system which closed almost a year ago.  What will happen?  Something soon we hope!
This blog article was written by Donald Begg, Director of Begg Shoes & Bags.
By Donald Begg|2016-07-12T12:40:14+01:00June 14th, 2016|News|